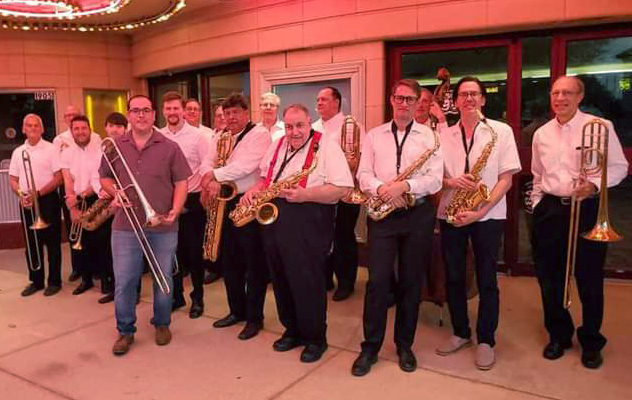 The Dickinson County Historical Society will hold a concert starring the Kansas All Star Big Band Friday, May 13.

Made up of the top jazz musicians of Kansas, the band will play the big-band hits of Tommy Dorsey, Glenn Miller, Thad Jones, Count Basie, and many more. There will also be a dance floor so that people can get up and dance along with their favorite tunes. Of the 18 band members, one of them grew up in Abilene and still has close ties here.

Mark Robinson, trombonist in the Kansas All Star Big Band, was born and raised in Abilene. When he was four years old Robinson began learning how to play a cornet but switched to the trombone upon entering the fifth grade. The decision to switch to the trombone was made by his father, Bill Robinson, who also played the trombone and decided that it would be easier to teach him an instrument that he already knew well. Despite his father making the decision to switch instruments for him, Robinson was fine with the change and continues to play the trombone to this day. Today, he has to know how to play every instrument in the band due to his role as a band teacher.

Upon entering the fifth grade at McKinley Grade School in Abilene, Robinson joined the band. While he was in sixth grade the band teacher started a Dixie Land group, which he joined. Once or twice a week the students practiced at the high school, which he said they thought was a pretty big deal.

The Dixie Land group played at Old Abilene Town and at the swimming pool during the water carnival in the 1960s. One of his memories of the Dixie Land group was that they performed before they had electric keyboards available and the band director had to load a piano in the back of his truck. When the group arrived at their destination, the band director backed his truck up to where the group was going to perform so that the pianist could sit in the bed to play the piano.

Over time, the Dixie Land group morphed into a group called the Night Owls. The Night Owls performed all around Abilene, including in a place called the Gas Light Club at the Trails End Hotel in 1969 and 1970. They played the Gas Light Club once a month and would pass a hat around for tips. If each band member made $7 or $8, they thought it was a pretty good night. Many of their songs from that period were by Herb Albert, who was quite popular at that time.

After graduating from Abilene High School, Robinson went to Fort Hays University, though he ended up quitting school for a while before finishing his college degree. Also, during this time, he played with a rock group out of Manhattan, known as Albatross. Following his departure from college, he went to work for Cessna in Hutchinson, but he eventually decided that it would be better to finish his college degree after experiencing repeated layoffs. In 1987, he completed his degree in music education at Bethel College in Newton.

With his degree completed, Robinson taught in the Catholic School system in Hutchinson for 23 years and then for four years in Nickerson. For the past seven years he has taught band in the Burrton Schools. When COVID-19 entered the picture, band members had to put covers over their instrument bells and puppy pads on the floor for the brass players to empty their spit on. Rather than purchasing the expensive bell covers, Robinson used women’s nylon stockings. After each rehearsal, he had to spray every chair down. Fortunately, things have come back to more normal now. Currently, Mark has six students in fifth grade, 16 in middle school, and 18 in high school.

Robinson, Anthony Panek, and Doug Kaufman came together several years ago and purchased the music and supplies from the collection of the late Sherman Gunn of Hutchinson. Gunn was one of the top trumpet players and led a big band in Las Vegas. He had a large music library and everything one would need to have a big band.

Panek then bought out Kaufman’s and Robinson’s shares as well. With all of this music and equipment, Panek decided that he should start a big band and commenced recruiting the top players in the state. While 90% of the band members are band directors, others are businessmen and even college students.

The Kansas All Star Big Band has four trumpets, four trombones, five saxes, three to four rhythm players, and the bandleader. While the band plays jazz music from the 1930s, 1940s, and 1950s, they also play more music like Buddy Ritch, though they do not have anything written in the past 10 or 15 years. They generally meet once to rehearse before one of their concerts, but each player is expected to know their parts and has practiced extensively before this rehearsal. “When you get to sit and play beside some of the very best musicians in Kansas then that ups it, you know the quality and fun quite a bit,” Robinson said.

Know before you go

Get tickets at: Solomon State Bank in Abilene or in Solomon, Dickinson County Bank in Enterprise, First National Bank of Hope in Hope or Herington, Astra Bank in Chapman, or the Heritage Center.